Saint of the Day

Summary: St John I, pope. martyr. Born in Tuscany (Italy) in the late fifth century; died in captivity at Ravenna on this day in 526. He was a conciliator and peacemaker, the first bishop of Rome to visit Constantinople. John was imprisoned by Theodoric, ruler of Italy and an Arian, for excessive sympathy toward the Church of the East.

John, the son of Constantius, was born in Tuscany, . 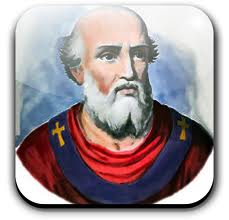 He was an archdeacon in Rome for several years before being elected Pope on the death of Pope St. Hormisdas in 523. He was a friend and confidant of the philosopher Boethius. The main event of his pontificate was his journey to Constantinople to try to negotiate between the Emperor Justin and the Arian Gothic king in Ravenna, Theodoric. Imprisoned by Theodoric on his return, he collapsed and died.

Successor to Hormisdas
Though old and frail, John was elected pope in succession to Hormisdas I (514-23). Hormisdas had been successful in getting the “two natures/one person”  doctrine on Christology accepted in Constantinople especially by the then no-nonsense emperor Justin against the Monophysite view which had always tended to be more prevalent there. 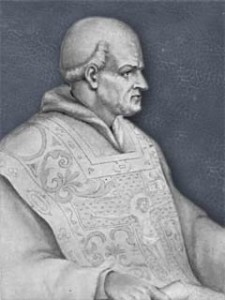 A deputation to Constantinople
Theodoric immediately recruited Pope John to lead a deputation of senators and ex-consuls to go to Constantinople and persuade the emperor Justin to call off this war against Arianism. John was the first pope ever to go the Constantinople. He was received with great honour and celebrated the liturgy there in Latin. The emperor agreed to cease hostilities against Arians and to hand back the churches, but he would not allow Arians forcibly converted to Catholicism to return to Arian belief and practice.

John collapses and dies
When John returned to Ravenna, Theodoric was furious and accused the Pope of having sold out to the emperor in return for all the adulation he had received. Already exhausted by his long journey and terrified by the prospect of severe punishment, John collapsed and died. He was buried in the nave of St Peter’s Basilica with the epitaph “a victim for Christ”. Because of his sufferings for the faith and his imprisonment, he is honoured as martyr.

Our Archive of Saints